Soleimani acquired celebrity status at home and abroad as leader of the foreign arm of the Revolutionary Guards and for his key role in fighting in Syria and Iraq.

He was instrumental in the spread of Iranian influence in the Middle East, which the United States and Tehran’s regional foes Saudi Arabia and Israel have struggled to keep in check.

He survived several assassination attempts against him by Western, Israeli and Arab agencies over the past 20 years.

Soleimani’s Quds Force, tasked with carrying out operations beyond Iran’s borders, shored up support for Syrian President Bashar al-Assad when he looked close to defeat in the civil war raging since 2011, and also helped armed groups defeat the Islamic State in Iraq and the Levant (ISIL, also known as ISIS).

Soleimani became head of the Quds Force in 1998 and kept a low profile for years while he strengthened Iran’s ties with Hezbollah in Lebanon, Syria’s Assad and Shia militia groups in Iraq.

In recent years, he stepped into the limelight, appearing alongside Iran’s Supreme Leader Ayatollah Ali Khamenei and other Shia leaders. 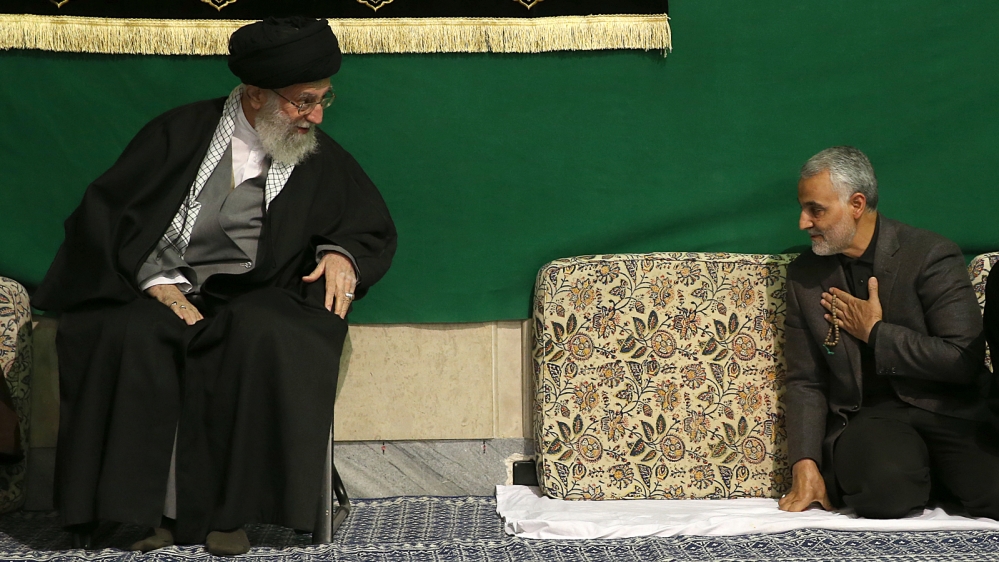 Under Soleimani’s leadership, the Quds Force vastly expanded its capabilities, becoming a significant influence in intelligence, financial, and political spheres beyond Iran’s borders.

Soleimani comes from a humble background, born into a poor family in southeastern Iran’s Kerman Province.

He started working as a 13-year-old to help support his family, spending his free time lifting weights and attending sermons by Khamenei.

As a young man during the Iranian revolution in 1979, Soleimani began his ascent through the Iranian military, reportedly receiving just six weeks of tactical training before seeing combat for the first time in Iran’s West Azerbaijan province, according to Foreign Policy magazine.

Soleimani emerged from the Iran-Iraq war a national hero for the missions he led across Iraq’s border.

Arms in Iraq and Syria

Following the re-establishment of government in Iraq in 2005, Soleimani’s influence extended into Iraqi politics under the leadership of former Prime Ministers Ibrahim al-Jaafari and Nouri al-Maliki.

During that time, the Badr Organisation, a Shia political party and paramilitary force that has been described as “Iran’s oldest proxy in Iraq”, became an arm of the state after the interior and transport ministries came under the control of the armed group’s political wing.

Following the outbreak of civil war in Syria in 2011, Soleimani ordered some of his Iraqi militias into Syria to defend the Assad government.

During Iraq’s fight against ISIL, the Hashd al-Shaabi (Popular Mobilisation Forces), an Iran-backed Shia paramilitary units, some of which fell under Soleimani’s control fought along the Iraqi military to defeat the armed group.

Mohammad Marandi, head of the American Studies at the University of Tehran, said that Soleimani’s role in helping defeat ISIL make him a “national hero” and a “martyr” among the Iranian people and other Middle Eastern countries.

“If it wasn’t for people like him, this region would have seen black flags flying across the region.”

Soleimani was rumoured to be dead on several occasions, including in a 2006 aircraft crash that killed other military officials in northwestern Iran and following a 2012 bombing in Damascus that killed top aides of embattled Syrian President Bashar al-Assad.

In November 2015, rumours circulated that Soleimani was killed or seriously wounded leading forces loyal to Assad as they fought around Syria’s Aleppo.

There have been repeated air attacks on Quds bases in Syria and in August Israel accused the force of planning “killer drone attacks” and said its air raid showed Tehran that its forces were vulnerable anywhere.

Foreign Minister Israel Katz said at the time that Israel was working to “uproot” Soleimani, according to Israeli media.

More recently in October, Tehran said it had foiled a plot by Israeli and Arab agencies to kill Soleimani.

In this article:Iraq, US, VS Iran

Why I compared Nigeria with US on infrastructural development – Fashola

Share this...FacebookTwitteremailThe Minister of Works and Housing, Babatunde Fashola, has clarified his comparison of the achievements of President Muhammadu Buhari’s government with that of...

Share this...FacebookTwitteremailPresident Donald Trump on Saturday defended his decision to fire an army officer who gave damning evidence against him during the impeachment probe....

PHOTO: Nigerian Man Killed For Urinating In The Street Of US, Killer Sentenced To Life In Prison

Share this...FacebookTwitteremailA 27-year-old Nigerian photographer known as Rasheed “O.J.” Olabode has been allegedly killed by a New Jersey man Christopher Poole, 26 after he...