Some members of Living Faith Church, better known as Winners Chapel, in Sabon Tasha area of Kaduna metropolis, were thrown into pandemonium on Sunday after a suspected suicide bomber sneaked into the church.

The suspect identified as Nathaniel Samuel was said to have gained access to the church’s auditorium before he was arrested.

He reportedly concealed an improvised explosive device (IED) in his bag.

Ekpenyong Edet, chief security officer of the church, said the suspect was monitored on closed circuit television (CCTV) before he was arrested.

He said the device was found when his bag was searched. Edet said the suspect got into the auditorium after beating security check at the entrance.

“He successfully gained access and was seated in the auditorium before he was suspected and the bag searched, only to find the explosive device”, he said. 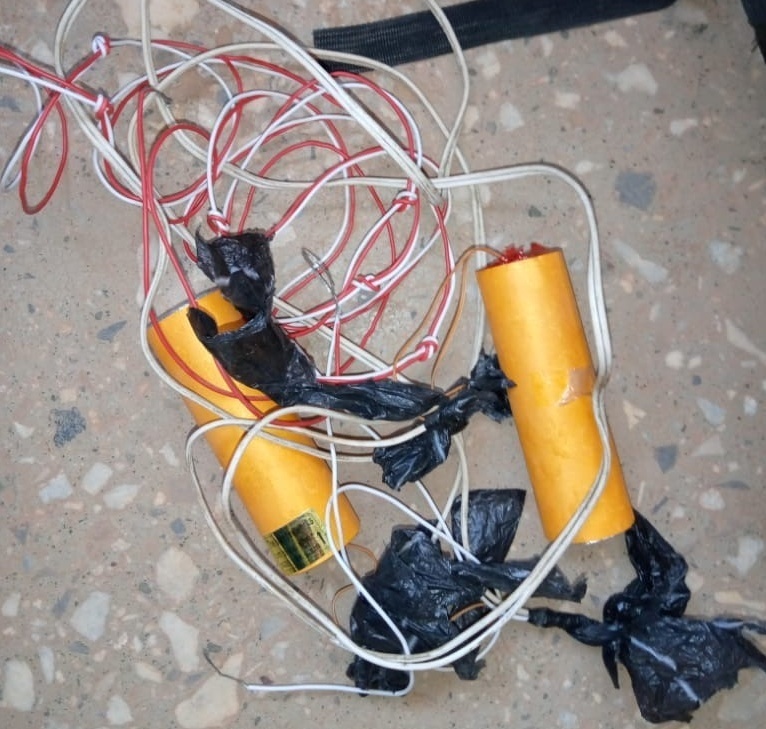 The explosive device found on him

“Today 02/02/2020 at about 0930hrs, One Nathaniel Samuel ‘M’ of Maraban Damishi via Maraban Rido in Chikun L.G.A was arrested by the Police inside Living Faith Church at Sabon Tasha while the Church service was session with some suspected Improvised Explosive Devices (IEDs) contained in a bag,” the statement read.

“The suspect is currently being interrogated at the Command’s Criminal Investigation Department was said to have left the bag on the church’s seat and went into a restroom for over an hour. Efforts are on to apprehend his accomplices.”

Sabo said all police officers in the command had been directed by the police commissioner to intensify surveillance and to liaise with stakeholders within their respective jurisdictions to ensure collective vigilance.

He also advised those in charge of schools, places of worship, motor parks, markets, recreational centers and other public places to revive the usual checks on vehicles and luggage especially at entrance points.

Share this...FacebookTwitteremailBarely 24 hours after his removal, Kaduna state governor  Nasiru  El-Rufai has appointed the deposed Emir of Kano, Muhammadu Sanusi into the board...

Share this...FacebookTwitteremailGunmen riding a motorbike unleashed terror on some villages in Igabi and Giwa Local Government Areas of Kaduna State killing not less than...

thenewshawkMarch 2, 2020
You cannot copy content of thenewshawk.ng ...sorry about that