A Nigerian pressure group, Coalition of Northern Groups has on Wednesday announced on its twitter handle that the #EndInsecurityNow . protest will commence tomorrow (Thursday ) 15 October across all the 19 Northern states.

‘’It is to register their dissatisfaction over how the war against insecurity was being handled with unseriousness.’’

The group said the protest became necessary following perceived abandonment by the President and other political leaders in northern Nigeria.

Addressing journalists on Wednesday, Abdul-Azeez Suleiman, the spokesperson of CNG said the protest was intended to spread across the 19 northern states.

Suleiman while speaking, said the Coalition observed that “while the southern elected and appointed leaders and representatives are quick to identify with their people at the time of need, their counterparts from the North, including the President, the Senate President, Senators, Rep members, governors, state legislators and other government appointees would rather abandon the hundreds of thousands of people in northern communities exposed to crime, lawlessness and insecurity in the hands of bandits, insurgents, kidnappers, rapists rustlers, and other violent criminals without any form of protection. 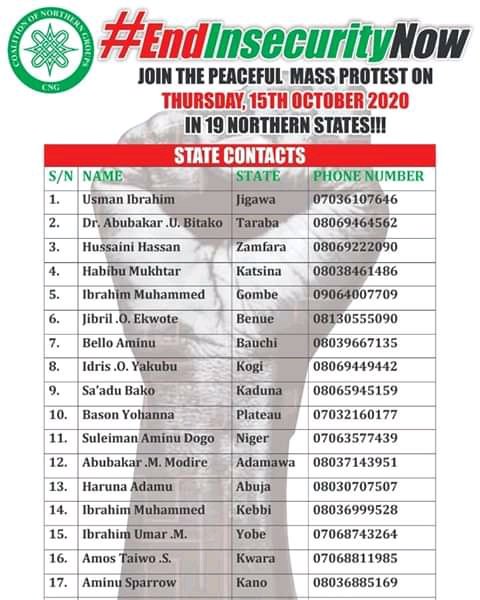 “That it is contradictory that despite several protests and pleas by northerners, the authorities never deemed it fit to extend the swift spirit deployed against FSARS into securing the North, or addressing the myriad distresses faced by northerners.

“That the authorities appear bent on sustaining the harsh, unacceptable regime of exploitative hikes in electricity tariffs for which the North shall bear the brunt more than other parts of the country.

“That the federal government appears not keen on resolving the lingering dispute with the Academic Staff  Union to enable the recommencement of university education”,

CNG, therefore, said in the light of the foregone observations, it is left with no option but to direct the extension of the protests to all northern states, commencing from Thursday, October 15, 2020.

“By this, all CNG state chapters and student wings are mandated to resume the mobilisation of responsible sections of the civil society, NGOs, women groups, professional associations, artisans and concerned parents in their respective states for the continuation of our protests started in Katsina state in June”, Suleiman said.

CNG said part of their demand would be for the federal government to immediately declare a state of emergency on security and take practical steps to end all manifestations of insecurity in northern Nigeria and other parts of the country.

“Demand thorough reorientation of the entire police force and its empowerment by way of additional personnel, modern training and adequate equipment to be able to reclaim its universal internal security function.

“Publicly condemn and pass a vote of no confidence on those officeholders and elected leaders who have abandoned the bulk of northerners to the mercy of a vicious insurgency, destructive banditry, rape and sexual assaults, violent communal clashes amidst mounting poverty and entrenched fear of widespread kidnappings for ransom.

“To declare the agreement reached by labour with the government on new electricity tariff unacceptable and demand the immediate, unconditional reversal to the old rate”, CNG added.

Already the campaign is getting momentum via Twitter and other social media with many civil society groups joining. 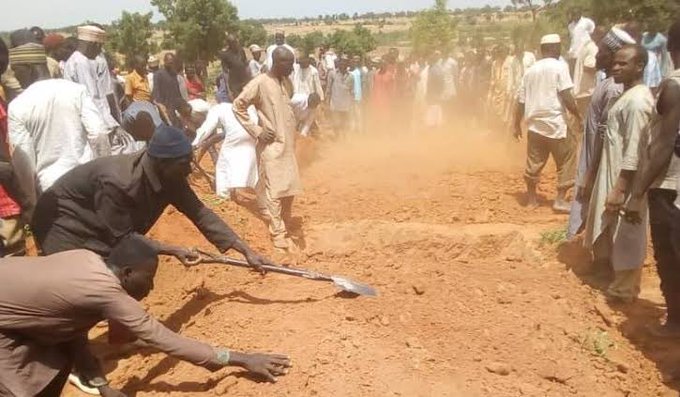 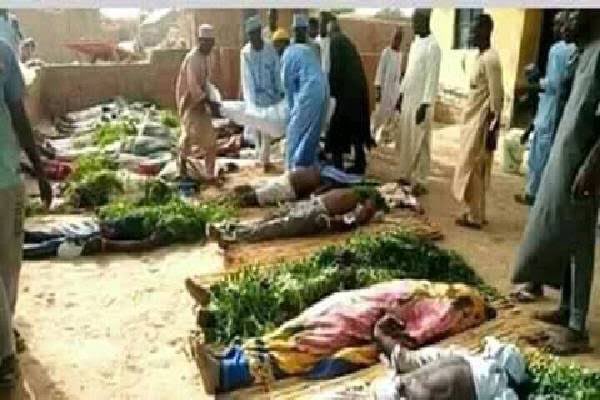 In this article:CNG, Featured, protests

Share this...FacebookTwitteremailDisturbed by the deplorable Numan -Gombe road Adamawa residents have on Thursday threatened to embark on mass protest as they issued  10 days...

Video: Riot in Lagos, As police Clash With Protesters Over Okada Ban

Share this...FacebookTwitteremailRports say that there was a massive riot in Lagos, Southwest Nigeria following the ban on okadas and tricycles from plying certain routes...

Share this...FacebookTwitteremail The over 2,000  sacked workers whom PDP led government in Adamawa state said were “improperly employed” by the Muhammadu Umaru Jibrilla Bindow...