Nigerians have called out Justice Mary Odili, the wife of Peter Odili, following the sacking of David Lyon as Bayelsa Governor-Elect by the Supreme Court of Nigeria.

Earlier  the Supreme Court on Thursday nullified the election of Lyon as Bayelsa State governor-elect, and his running mate Biobarakuma Degi-Eremienyo.

Lyon who was to be sworn-in on Friday, February 14, was sacked on Thursday, with the Apex court declaring the candidate of the Peoples Democratic Party (PDP), Douye Diri as the authentic winner of the election.

A five-man panel of the Supreme Court led by Justice Mary Odili ordered Independent National Electoral Commission (INEC) to withdraw the Certificate of Return issued to All Progressives Congress’ candidates as the winners of November 16, 2019 governorship election in the state.

Justice Odili asked INEC to issue a fresh certificate to the governorship candidate with the highest votes cast and wide geographical spread in the governorship election held on November 16, 2020.

The Supreme Court sacked Lyon for presenting a running mate with a fake certificate in the November 16, 2019 governorship election in the state.

Reacting the verdict of the Supreme Court in a statement on his Twitter handle, Atiku Abubakar expressed joy at the apex court’s declaration, saying the ruling is a confirmation of the peoples mandate on Diri and the PDP. He added that he is confident the incoming leader would do well.

Like Atiku, Nigerians took to Twitter to call out Justice Mary Odili, who read the judgment the sacking of APC’s Lyon and the declaration of PDP’s Diri as Bayelsa Governor-Elect.

Read some of the reactions below…

And they wont tell the UN that Justice Odili , wife of a PDP chief, was head of the panel that transferred Bayelsa to the PDP.

If Mary Odili handles Buhari and Atiku case. Walahi Buhari won’t escape. Buhari would have been in Daura chilling.

Justice Mary Odili? Please end this narrative! There were five justices on the panel, all of them had equal vote, and the judgment was unanimous. No need for conspiracy theory, the guy submitted fake documents, and the court did their thing: https://twitter.com/tobbiematthew/status/1227974352773185536 …

Enny@DrKenny15
I really feel sorry for this innocent man the “former Governor elect” David Lyon. Earlier today, he was at the Stadium rehearsing against tomorrow hand over ceremony. Learning how to wave, how to smile and steps to take. #Mary Odili judgement gave him Smack Down 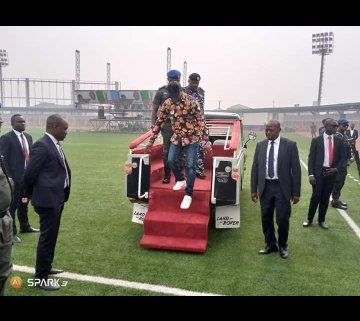 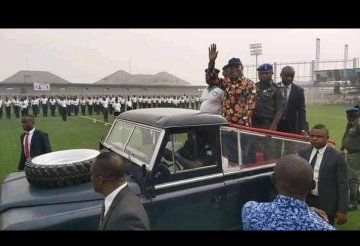 NEFERTITI – (The beautiful one has come)

Justice Mary Odili led Bayelsa Supreme Court Judgement that ousted David Lyon is just so unfortunate bcos PDP will now reap where it did not sow.

PDP was never ready as a party going into that election & Dickson caused that defeat.

But APC came with an even bigger incompetence.

2/3 of 8 is 6.
PDP have 1/4 of votes in 5.
So what will @inecnigeria do tomorrow about the Supreme Court judgement in Bayelsa?
Did Mary Odili specifically mentioned PDP in her judgement?
Hmm, make we watch the movie 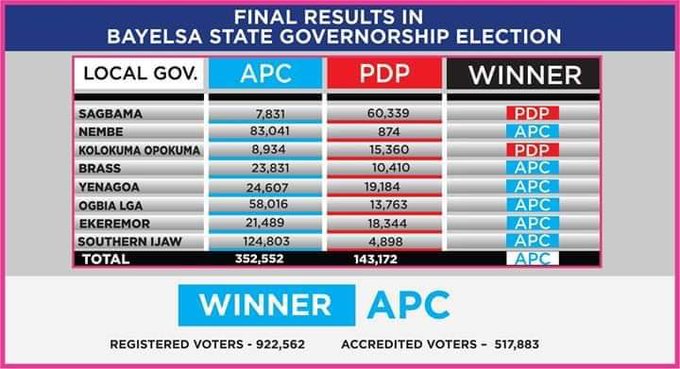 19 people are talking about this
In this article:Featured

Share this...FacebookTwitteremail   The University of Maiduguri Teaching Hospital Physical Rehabilitation Centre (PRC) supported by the International Community of the Red Cross (ICRC) has...

Share this...FacebookTwitteremail The All Progressives Congress (APC) in Borno has threatened legal action against the spokesman of People Democratic Party (PDP) in the state,...

Share this...FacebookTwitteremail The Labour Party in Borno has inaugurated 168-member Presidential Campaign Council (PCC) to mobilize for the victory of its presidential candidate in...