A team of security operatives on Monday stormed the palace of the Emir of Kano in Kano State.

This followed the removal of the Emir of Kano, Muhammadu Sanusi II, from office by the state government.

The team of security personnel at the traditional ruler’s palace included men of the Nigeria Police and the Nigeria Security and Civil Defence Corps (NSCDC). 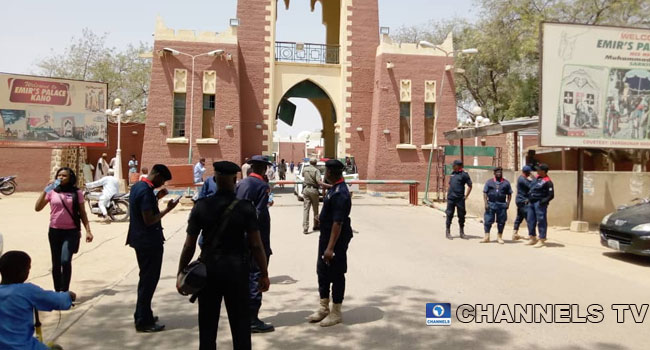 Sanusi’s removal was announced by the Secretary to the State Government, Usman Alhaji, during the State Executive Council meeting held at the Government House in Kano.

According to Alhaji, the decision to remove the traditional ruler was as a result of his alleged consistent refusal to abide by instructions given to him by the state government. 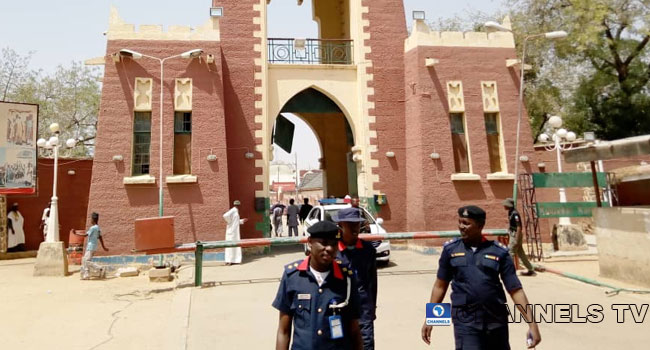 Elsewhere, there have been reports of a rowdy session in the Kano State House of Assembly shortly after the announcement of the emir’s removal.

In a video trending on social media, Monday’s plenary was when a group of lawmakers in the chamber clustered together in what appeared to be a fight over the mace in the legislative chamber of the House.

The mace was later taken away from the chamber by a man believed to be the clerk of the House.

Sanusi’s removal comes one week after the Kano State Public Complaint and Anti-Corruption Commission had summoned the Emir.

He was asked to respond to a petition accusing him of selling lands belonging to the Kano Emirate to the tune of N2 billion.

The traditional ruler had, however, secured a restriction order from a court to stop the commission from investigating him.

Announcing the removal after an emergency council meeting, the governor, in a press release read by the secretary of the state government, Usman Alhaji, said the removal of the emir is based on total disrespect to the provisions of the Kano emirate law.
The emir, according to the SSG, was persistently refusing to attend official meetings and programmes organized by the government without any lawful justification which amount to total insubordination.
He said, “The Kano State Executive Council under the chairmanship of His Excellency, Governor Abdullahi Umar  Ganduje has unanimously approved the immediate removal) dethronment of the emir of Kano, Muhammadu Sanusi ll,”
According to him, “it is on record that in so many instances, Malam Muhammadu Sanusi ll has been found breaching part 3 section 13(a-e) of the Kano State Emirate Law 2019,and which if left unchecked will destroy the good and established image of the Kano emirate.
“This removal is made after due consultation with relevant stakeholders and in compliance with part 3 section 13 of the Kano State Emirate Law 2019 and other reasons stated above,” he said.
Mr Alhaji added that the removal was reached in order to safeguard the sanctity, culture, tradition, religion and prestige of the Kano emirate built over thousands years.
He further stated that governor Ganduje calls on the public to remain calm, law-abiding and to go about their normal businesses, while the new emir would soon be appointed.

Recall that earlier in the day, members of the Kano State House of Assembly were in rowdy session over plan to submit a report, recommending the removal of Emir of Kano Muhammadu Sanusi II.

A group had on Wednesday last week submitted a petition before the house, calling for the emir’s removal for alleged violation of culture and tradition of the state.

The speaker of the Assembly, Abdulaziz Gafasa, without reading the exact content of the petition, then set up a committee headed by the deputy speaker, Hamisu Chidari, to investigate and report within one week.

But crisis broke in the Assembly on Monday Morning when the deputy speaker sought the approval of the house to present the report today.

As members of the opposition PDP insisted that the report must be delayed till Tuesday for further investigation, the session went wild and the mace snatched by member representing Warawa Constituency.

Share this...FacebookTwitteremailKano state Governor, Abdullahi Ganduje , launched the second phase of distribution of food palliatives to the poor and most vulnerable families across...

Share this...FacebookTwitteremail  Security Operatives on Monday arrested dethroned Emir of Kano Muhammad Sanusi II and whisked him out of the ancient city amidst tight...

Share this...FacebookTwitteremailFinally, the Kano state governor, Abdullahi Ganduje on Monday, March 9,  dethroned Emir of Kano, Muhammad Sanusi II, who has been under much...