Facebook recently removed dozens of accounts found interfering in elections all over the world, some of them targeted Atiku Abubakar.

The presidential candidate of the Peoples Democratic Party (PDP), Atiku Abubakar, was the target of some Facebook accounts operated by Archimedes Group, an Israeli political consulting and lobbying firm, during the campaign for the 2019 presidential election.

Facebook’s head of cybersecurity policy, Nathaniel Gleicher, announced at a press conference on Thursday, May 16, 2019 that the social media giant removed a total of 265 accounts, pages, groups and events involved in coordinated inauthentic behavior which aimed to influence elections in Nigeria, Senegal, Togo, Angola, Niger and Tunisia along with some activity in Latin America and Southeast Asia.

Gleicher disclosed that some of the suspected activity was linked to Tel-Aviv-based Archimedes as its network was discovered to have used affected accounts to run pages, disseminate their content and artificially increase engagement.

They also represented themselves as locals, including local news organizations, and published allegedly leaked information about politicians.

“The Page administrators and account owners frequently posted about political news, including topics like elections in various countries, candidate views and criticism of political opponents,”Gleicher said. 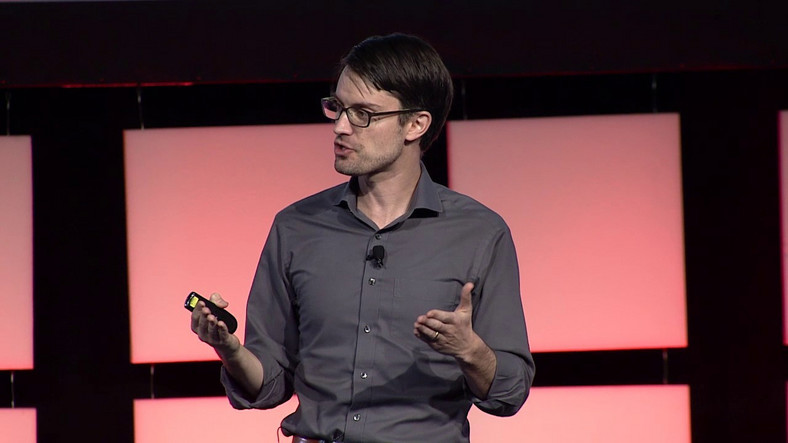 According to a report by United States think tank, Atlantic Council’s Digital Forensic Research Lab, an analysis of the affected accounts revealed that many of them focused on the February 2019 Nigerian elections.

In the February 23 presidential election, the incumbent, President Muhammad Buhari, was declared the winner by the Independent National Electoral Commission (INEC), winning 15,191,847 votes to Atiku’s 11,262,978. Atiku has filed a petition before the Presidential Election Petitions Tribunal to contest the result, and hearings commenced this week.

DFRLab noted that the affected accounts appeared to have launched a sustained campaign against Atiku’s candidacy while rooting for Buhari to win a second term. 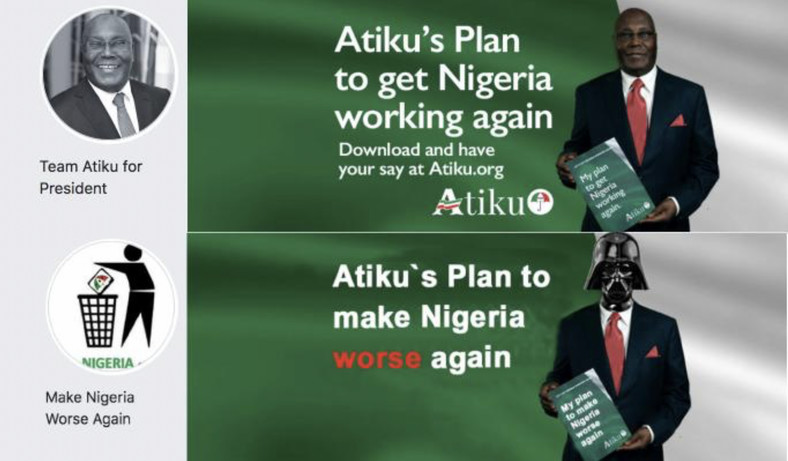 “Make Nigeria Worse Again”, one of the deleted pages, had a banner image of Atiku depicted as Darth Vader, a notorious fictional villain in the Star Wars movie franchise. The page’s name is also a mischievous play on Atiku’s campaign slogan to “Get Nigeria Working Again”.

DFRLab also discovered another page named “Imagine a Nigeria without Buhari” which eulogised the president’s first term achievements and also attacked the record of Atiku’s PDP when it controlled the Federal Government for 16 years. 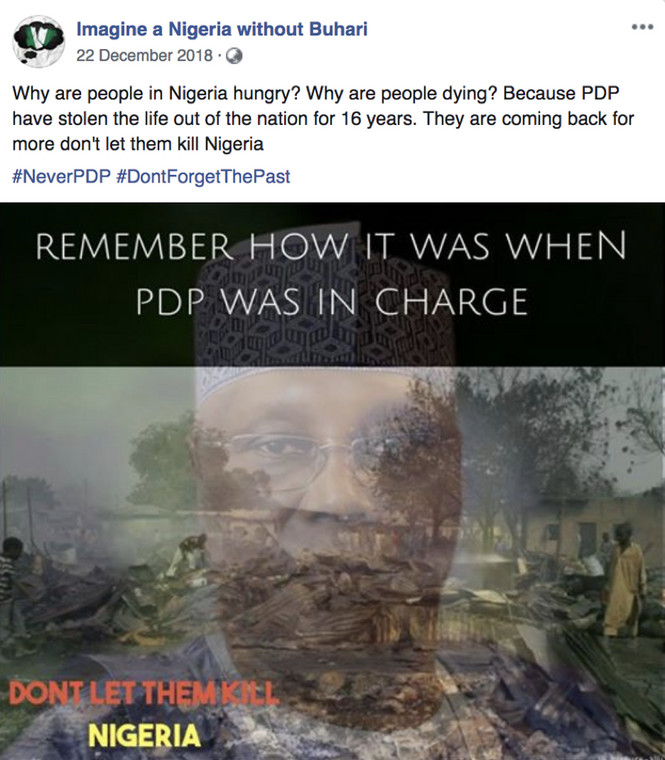 Another page, “Team Atiku For President”, was also suspected to have been a honeytrap to suck in Atiku supporters by appearing to support him and then target them with anti-Atiku content later, possibly diverting them to the “Make Nigeria Worse Again” page.

Another group of pages were discovered to have focused on the bloody elections in Rivers State, with a particular page named “Rivers Violence Watch” consistently posting content that targeted Nyesom Wike, a PDP governor. 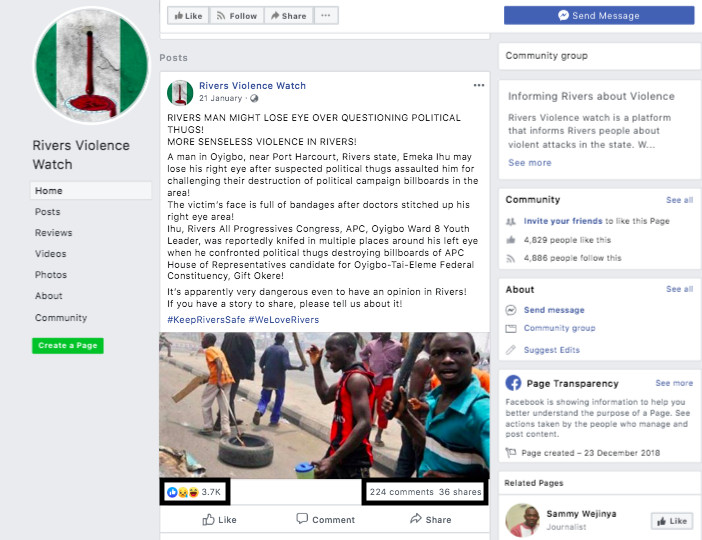 Wike eventually won the election, his second term in office, after a protracted process that took over a month to conclude due to widespread electoral violence in the oil-rich state.

DFRLab noted that many of the pages that focused on individual African countries and claimed to be run by somebody in those countries were, in fact, managed from elsewhere.

On its official About page, which has now been taken down, Archimedes said that it has taken significant roles in many political and public campaigns, among them presidential elections and other social media projects all over the world.

It had previously claimed on the page that it uses “every tool and take every advantage available in order to change reality according to client’s wishes”. This description of its operation was deleted following the Facebook announcement on Thursday.

On Thursday, Facebook accused Archimedes of repeatedly violating its misrepresentation policy as well as other policies such as engaging in coordinated inauthentic behavior.

“This organisation and all its subsidiaries are now banned from Facebook, and it has been issued a cease and desist letter,” Gleicher announced.

Gleicher also revealed that around $812,000 was spent by the group for ads on Facebook paid for in Brazilian reals, Israeli shekel, and US dollars. The first ad ran in December 2012 and the most recent ad ran in April 2019.

“We’re constantly working to detect and stop this type of activity because we don’t want our services to be used to manipulate people. We’re taking down these Pages and accounts based on their behavior, not the content they posted.

“As in other cases involving coordinated inauthentic behavior, the individuals behind this activity coordinated with one another to mislead others about who they were and what they were doing, and that was the basis for our action,” Gleicher explained.

Even though Facebook could not authoritatively determine Archimedes’ motives, Gleicher told journalists that it may be commercial or political or for some other strategic goal.

Facebook has, in recent times, been criticised for being pivotal to the spread of fake news and foreign interference with its lax policies that allow politicians buy ads that can widen the audience for them to push their, sometimes, sinister agendas.

The spread of fake news and foreign interference in elections caused a global outrage especially with the electoral triumph of Donald Trump as United States president in 2016.

In January, ahead of Nigeria’s 2019 elections which took place on February 23 and March 9, Facebook announced an extension of some of its political advertising rules and tools to curb the spread of fake news and foreign interference in the country.

“We’ll temporarily expand enforcement and not accept foreign electoral ads around their elections, starting with Nigeria on January 16,” an official statement read.

A repeat of Cambridge Analytica scandal

This is not Nigeria’s first involvement with a foreign interference incident around its elections as it emerged last year that an unnamed Nigerian billionaire paid £2 million to Cambridge Analytica, a political consulting firm, to influence the 2015 presidential election in favour of then-president, Goodluck Jonathan.

Cambridge Analytica employees were flown to Nigeria and Israeli hackers were hired to break into then-opponent Buhari’s emails to exhume his financial and medical records.

The Cambridge Analytica team was lodged in a hotel in Abuja a few weeks to the presidential election and worked on a communications campaign for Jonathan who is reported to have been unaware of the plot.

The Israeli intelligence operatives who worked with Cambridge Analytica during this period claimed that France and Israel wanted Jonathan to win the presidential election.

Cambridge Analytica hacked Facebook to harvest the profile of millions of users and target what was determined to be their worst fears.

In a video the firm produced, people were filmed being dismembered, having their throats cut and bled to death, and also burned to death in a bid to portray Muslims as violent and Buhari as the man that would impose Sharia Law that’ll make that sort of violence commonplace in the country.

“It was voter suppression of the most crude and basic kind. It was targeted at Buhari voters in Buhari regions to basically scare the shit out of them and stop them from voting,” a former Cambridge Analytica employee who worked on the campaign said.